Emmenopterys henryi, a deciduous tree that’s native to central and South-Western China, and was planted at Borde Hill near Haywards Heath in 1928, will soon burst into bloom thanks to the late-summer heatwave.

Described by the great Edwardian plant hunter EH Wilson as ‘one of the most strikingly beautiful trees of Chinese forests’, the Emmenopterys was introduced to the UK in 1907.  It is notoriously shy to flower in the West and has only flowered four times before at Borde Hill.

Borde Hill’s largest specimen celebrates its 93rd birthday this year and was grown from seed collected by eminent plant hunter George Forrest on an expedition in Southern China. The seed was sent home to his sponsor, Col Stephenson R Clarke of Borde Hill, who duly planted it in his Azalea Ring.

The Colonel’s beloved tree is currently in bud for just the fifth time in its lifetime. Close to this old tree is a smaller Emmenopterys, a specimen from Kew Gardens, collected by EH Wilson at turn of the 20th century, which is now 43 years old but hasn’t flowered this year. 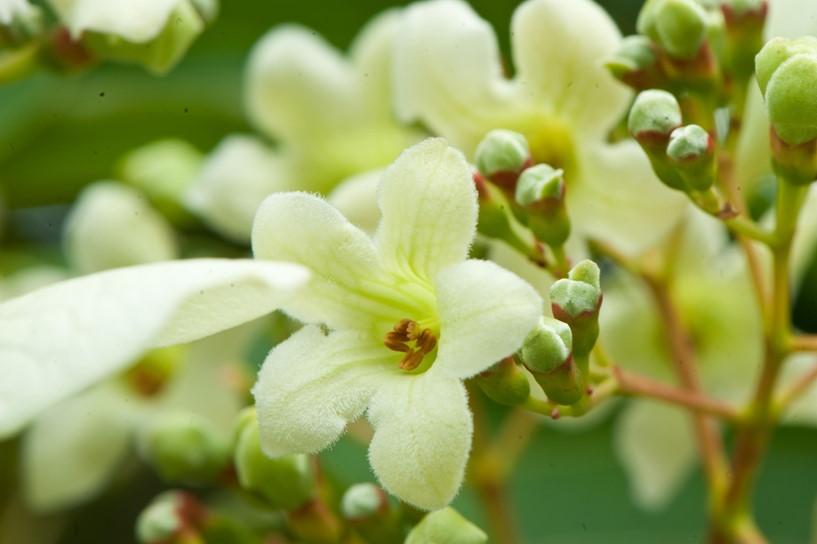 Andrewjohn Stephenson Clarke, great grandson to the Colonel, says, ‘We are incredibly lucky to have both the Wilson and Forrest Emmenopterys about to bloom.  My grandfather planted the 93-year-old specimen, but never saw it flower in his lifetime. Neither did his son or grandson - we had to wait four generations before it first flowered in 2011. The Colonel would have been fascinated by the weather conditions we have experienced in Southern England this year and its effect on our plant collection. He kept detailed notes of every seed and tree planted on the estate, and his correspondence with both Wilson and Forrest makes for fascinating reading.  If he were here today, he would be thrilled to see Forrest’s Emmenopterys henryi in bud and about to bloom alongside the younger specimen in the 128th anniversary year of his garden. The cold winter, followed by our extended hot summer, may have helped to produce this year’s flowering. We had a small showing of flowers in 2011, 2012, 2016 and a large showing in 2018. We hope that the blooms will attract tree lovers from far and wide!’

George Forrest was a plant hunter and explorer who undertook seven major expeditions. Forrest’s travels were adventurous in the extreme - he journeyed through jungles and was subjected to swarms of insects, survived exposure to poisonous plants, avoided sheer cliffs and deep gorges, escaped warring tribes and malaria which killed one of his travelling companions. He was responsible for introducing hundreds of species into Western cultivation including the Emmenopterys henryi.

Forrest's prize Emmenopterys tree is strikingly beautiful with reddish-purple young shoots and red leaves in spring, which mature to a glossy green, producing a shock of small white flowers.

The blooms are expected to come out in the next two weeks, but please check our website for updates: www.bordehill.co.uk   Images courtesy of Mrs Stephenson Clarke.